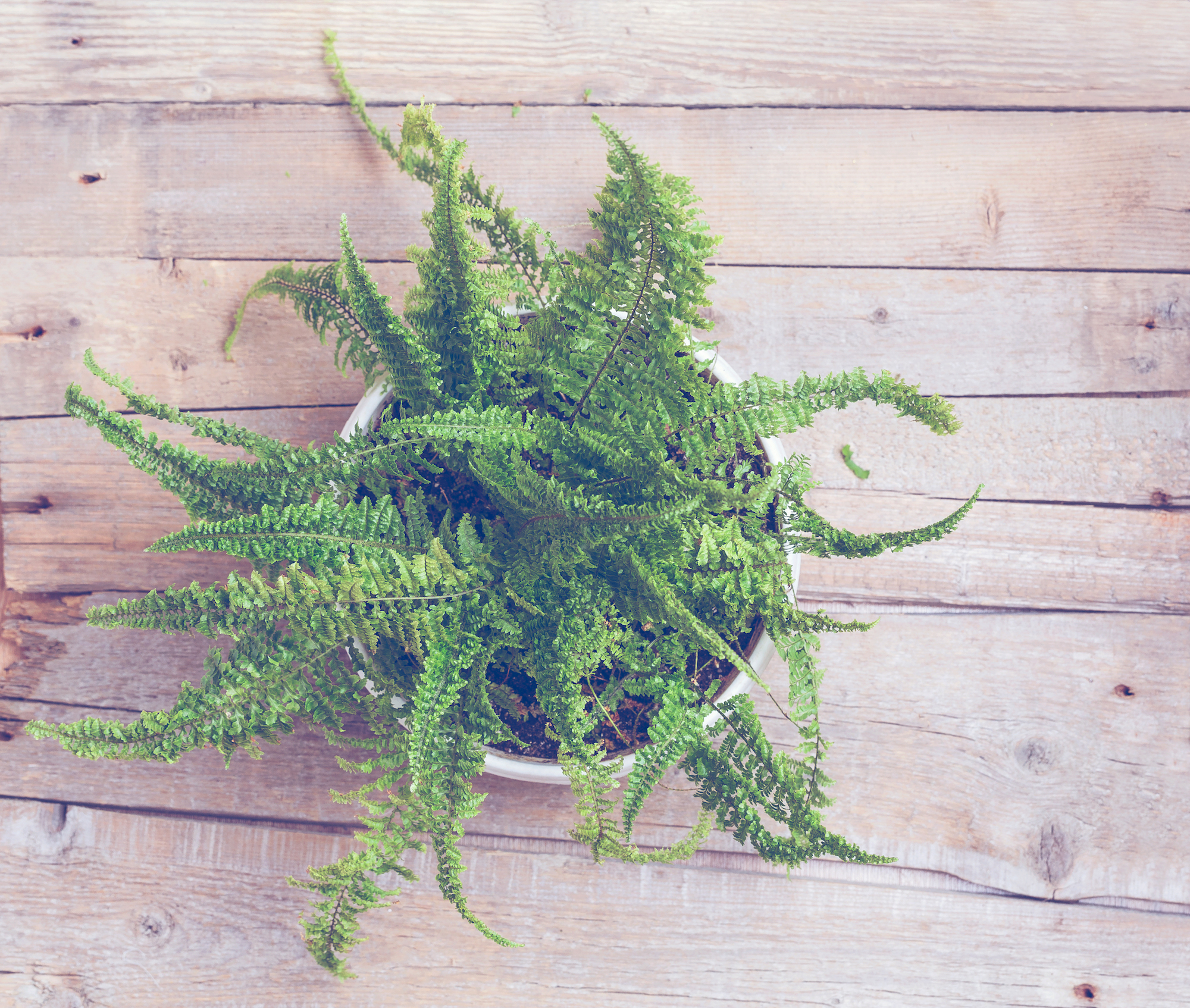 Inside This Post: Using houseplants is a natural way to clean the air. The 13 best plants for cleaning indoor air to detoxify your home, add humidity and an affordable solution to clean the air.

Since you spend most of your time indoors at home, and the disturbing fact that your indoor air is ten times more toxic than that of outside air, it’s important to take measures to clean the air you breathe most hours of the day.

Indoor air pollutants have been ranked among the top five environmental risks to public health, according to the EPA. That’s because stagnant indoor environments allow pollutants to build up in greater amounts than are safe to be breathing in.

Furniture, upholstery, synthetic products in building materials, home products and even your bedding, can emit a variety of toxic compounds, like formaldehyde. Certainly harsh chemicals in home products, fragrances like candles and air fresheners are major contributors to toxic air, as well.

Indoor air pollution can also be caused by dust, pollen, outside materials (like soil and compounds found on concrete and streets inside), bacteria, and molds. Outdoor air contaminants like car exhaust, fire and smoke, paint fumes, etc. also find a way into your home.

All of these are made worse in small or poorly-ventilated spaces (such as living in an apartment and never cracking open the window, or finding it’s sealed shut from that one time you painted over the seal accidentally.) Even cooler weather, when you don’t let fresh air in, your home becomes a poorly ventilated environment where toxins accumulate.

The good news is that there’s an easy and affordable solution to combating yucky stuff in your air.

It’s as simple as what NASA calls”nature’s life support system.”

In this NASA experiment, published in 1989, while researchers were looking for ways to effectively detoxify the air in the space station environments, they found that indoor plants can clean the air of cancer-causing Volatile Organic Compounds (VOCs) including, benzene and trichloroethylene (TCE), formaldehyde and carbon monoxide, through the photosynthesis process.

How Exactly do Houseplants Clean the Air?

Have you ever gotten a headache when you bring a new piece of furniture in your home, or just recently painted?

It commonly occurs with new construction and office buildings, and it’s what’s referred to as ‘sick building syndrome.’

This is where to chemical compounds from building materials and products that pollute the air, causes symptoms ranging from allergies, headaches and fatigue and even nervous-system disorders, cancer and death.

It’s good to let fresh air in to ventilate your home and work spaces, as well as remove products with toxic ingredients, but houseplants do a good job at cleaning the air too especially when you can’t open a window and let a breeze through to help detoxify.

Houseplants are nature’s air purifier, effectively cleaning the air through a process of photosynthesis.

Plants absorb some of the toxic particulates from air at the same time they take in carbon dioxide, which is then converted into fresh oxygen, through the process of photosynthesis.

That’s not all houseplants do.

The microorganisms that are presents in plants potted with potting soil, these microbes, are also responsible for much cleaning effect and important to cleaning indoor air.

Houseplants are an easy and affordable way to clean the air in your home and workplace. 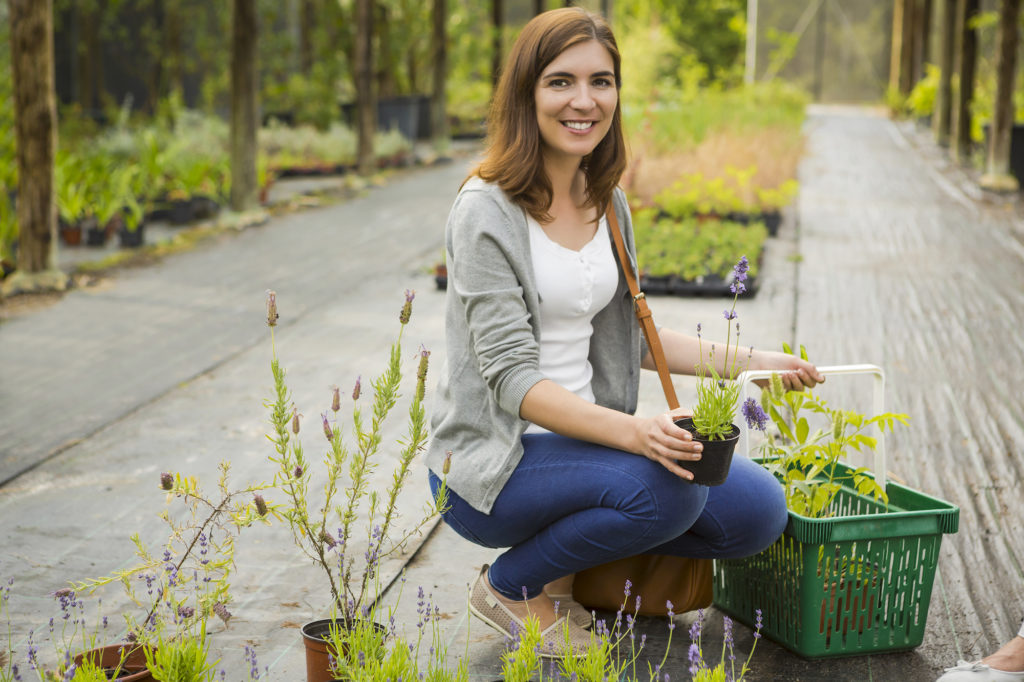 Since Americans spend most of their time indoors, healthy air quality should be a top priority. Discover the top plants to aid in the removal of pollutants such as formaldehyde, benzene, trichloroethylene and carbon monoxide.

Through studies conducted by NASA, scientists started by identifying 50 houseplants that remove many of the pollutants and gases commonly found inside homes.

NASA, with assistance from the Associated Landscape Contractors of America, conducted a two-year study directed by Dr. B.C. Wolverton, an environmental engineer from Picayune, Washington, and a research scientist for NASA for over 20 years.

Later, Wolverton expanded the study and assigned plants a rating from one to 10, based on a plant’s ability to remove chemical vapors or indoor air toxins, ease of growth and maintenance, resistance to insect infestation, and the rate at which water evaporates from the leaves.

He summarized much of his research in his book, “How to Grow Fresh Air – 50 Houseplants that Purify

The rule of thumb is to have 1- 2 houseplants per 100 square feet of space you have.

Wolverton says that, absent expensive testing, it’s impossible to guess how many plants might be needed to clean a room of its contaminants. But he usually recommends at least two “good sized” plants per 100 square feet of interior space.

And the bigger, and leafier the plant, the better. 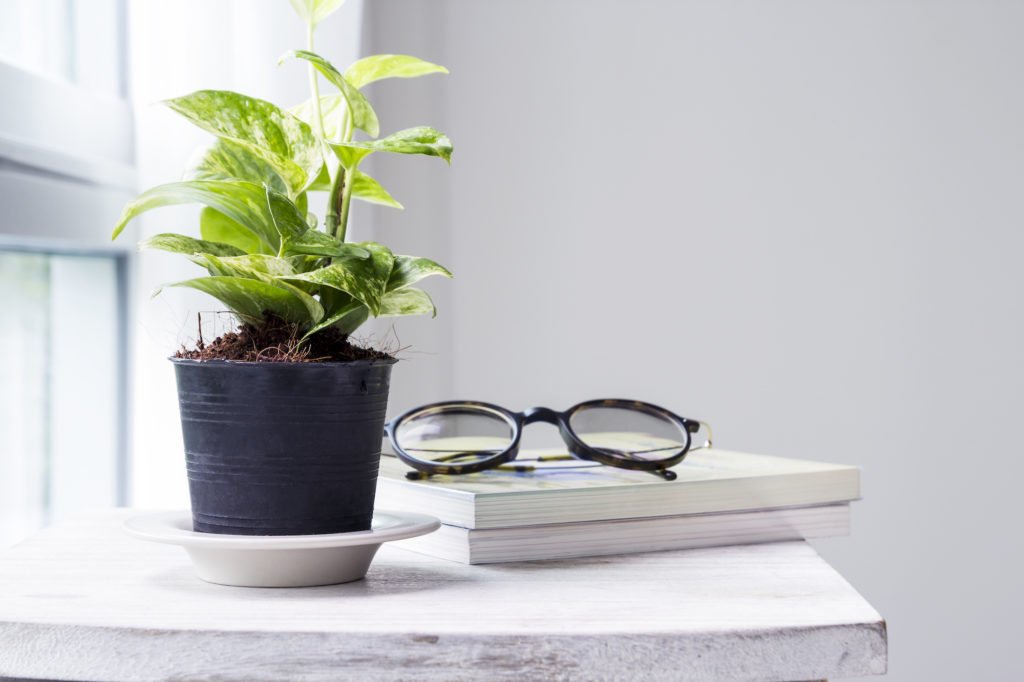 1. GOLDEN POTHOS
Wolverton says, “I usually recommend the golden pothos as my first choice, since it is a popular plant and easy to grow.” The golden pothos is also known as devil’s ivy and one of the easiest house plants to grow, it is low maintenance and requires very little Care. Water when top soil is dry, drain any excess water. Will tolerate all light levels. 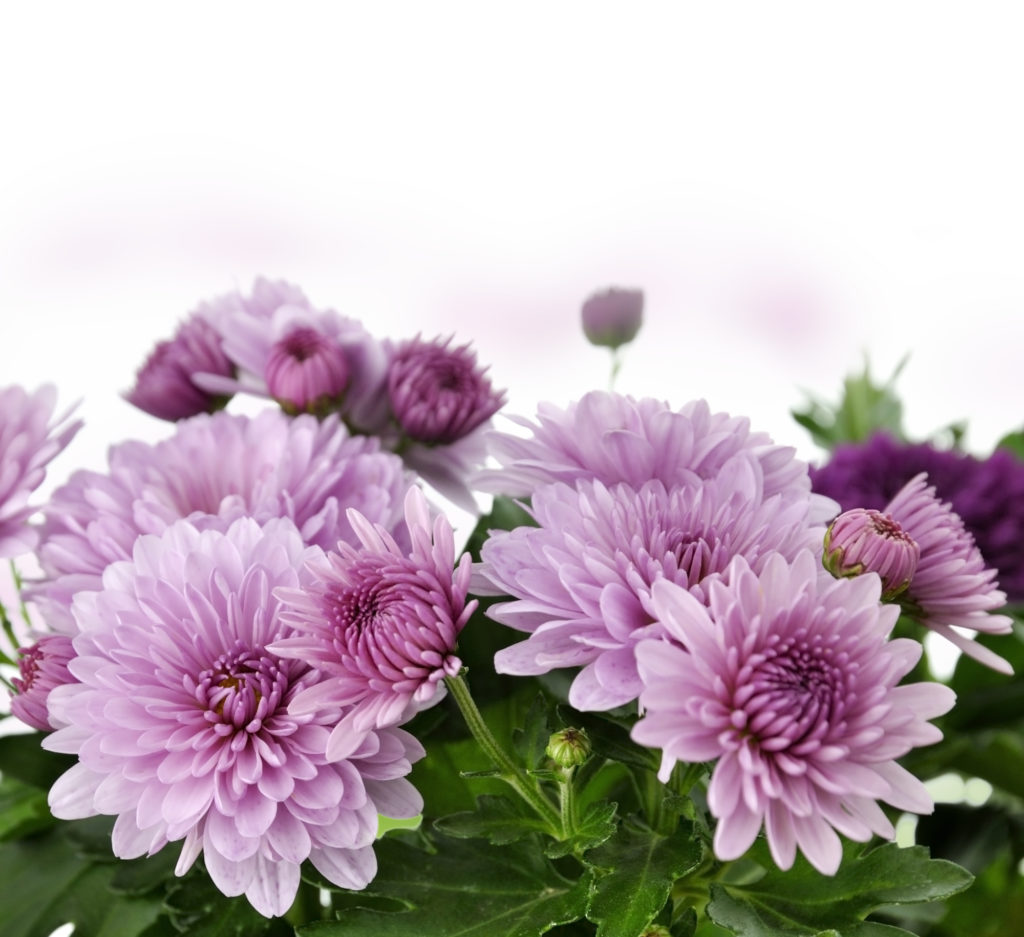 In the NASA research, this plant was an air-purifying champion, removing ammonia, benzene, formaldehyde, and xylene from indoor air. Popular in the Spring and Summer as a colorful addition to the home and garden, these are inexpensive at garden stores and can be planted outside after they’ve finished blooming. 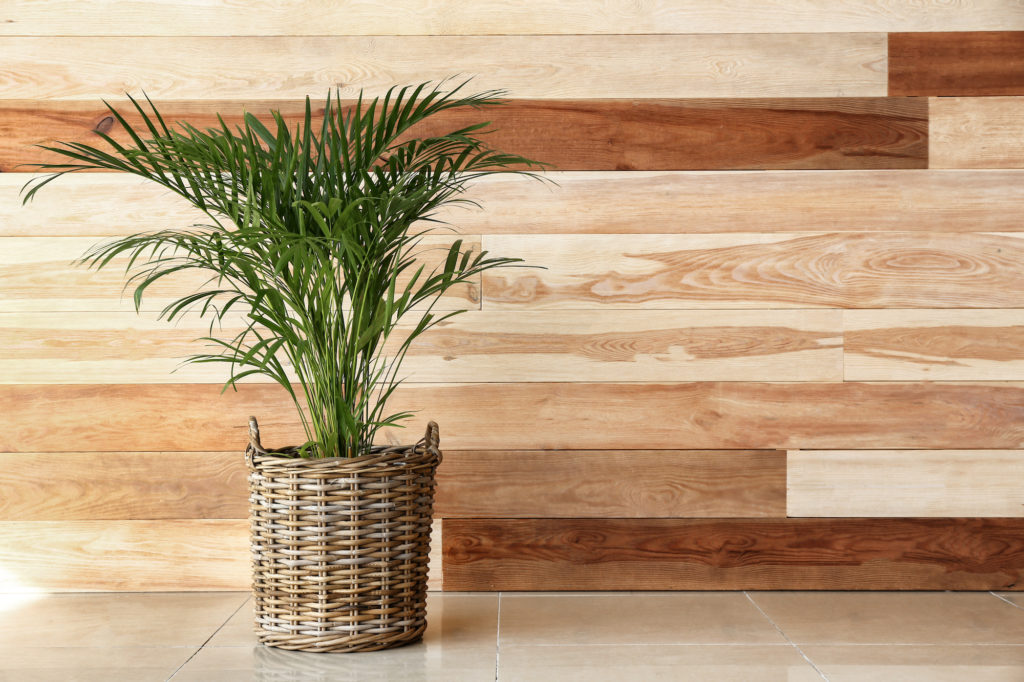 In tests conducted by Dr. Wolverton, the Areca palm removed more toluene and xylene than any other plant.

Toluene is one of the notorious ‘toxic trio’ (alongside formaldehyde and dibutyl phthalate.) All three are known to be hazardous to human health. Ensure your areca palm plant has a good potting soil and fertilize on a regular basis, except in winter. Water often to keep the root ball damp, and mist regularly to deter insects. 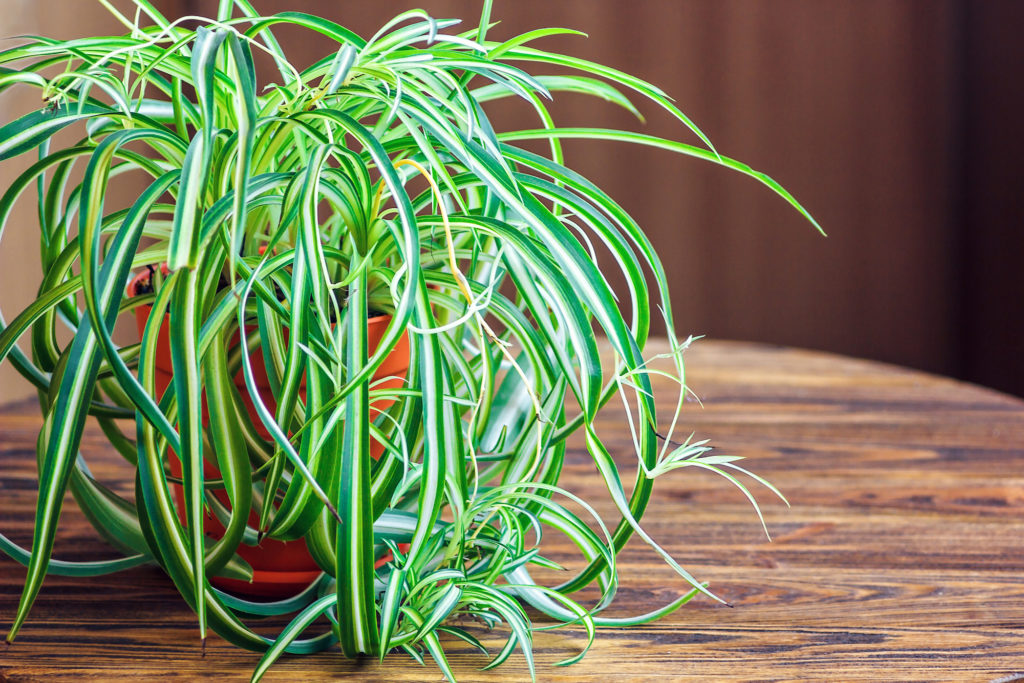 Pollutants removed: formaldehyde and xylene (used as a solvent in printing, rubber, and leather industries) 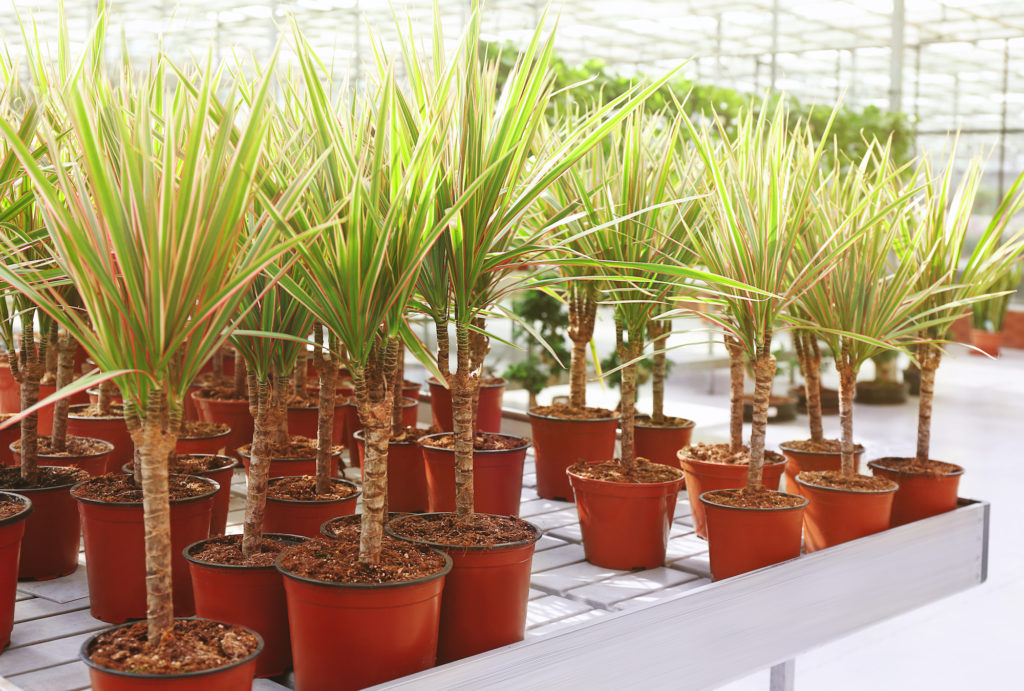 Dracaena plants, are rated one of the best plants for removing trichloroethylene from the air. Good news, it’s also one of the  easiest houseplants to grow. If possible, avoid fluoridated water, since these dracaena plants can be sensitive to fluoride.

Caution: Pet owners might want to select a different plant, however, as these are toxic to cats and dogs. 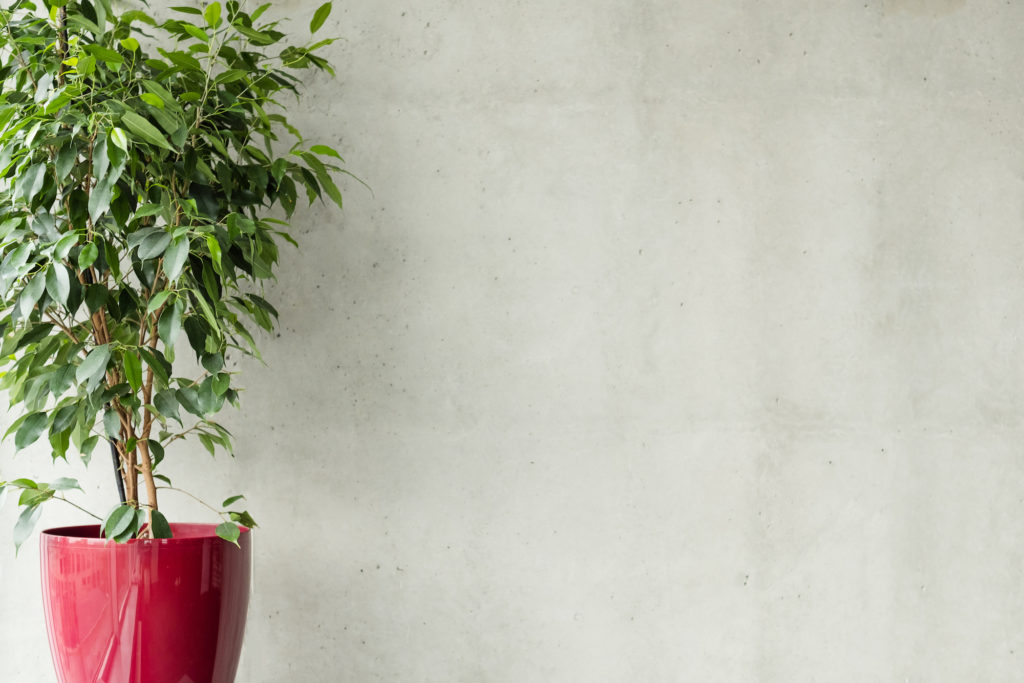 The ficus tree is a hardy plant that ends up being between two and 10 feet tall. It’s a low-maintenance houseplant that needs bright, indirect light. You need to let the soil to dry out between waterings. Although this weeping fig has serious air-cleaning abilities, it can also be taken outside in late spring and brought back indoors when temperatures are warm enough and well above freezing. 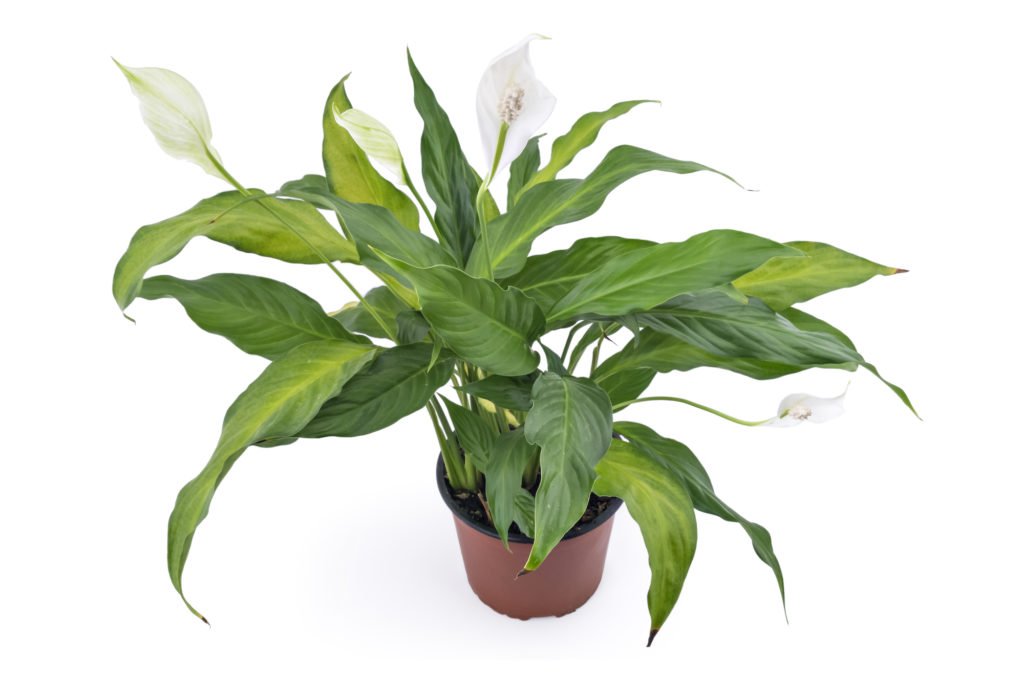 It’s easy to grow, and they flower much of the summer. Peace Lily plants need to be kept in a shady spot with moist soil. You need to avoid overwatering as well.

CAUTION: Toxic to humans and pets, the plant’s leaves contain calcium oxalate and should be kept away from children. 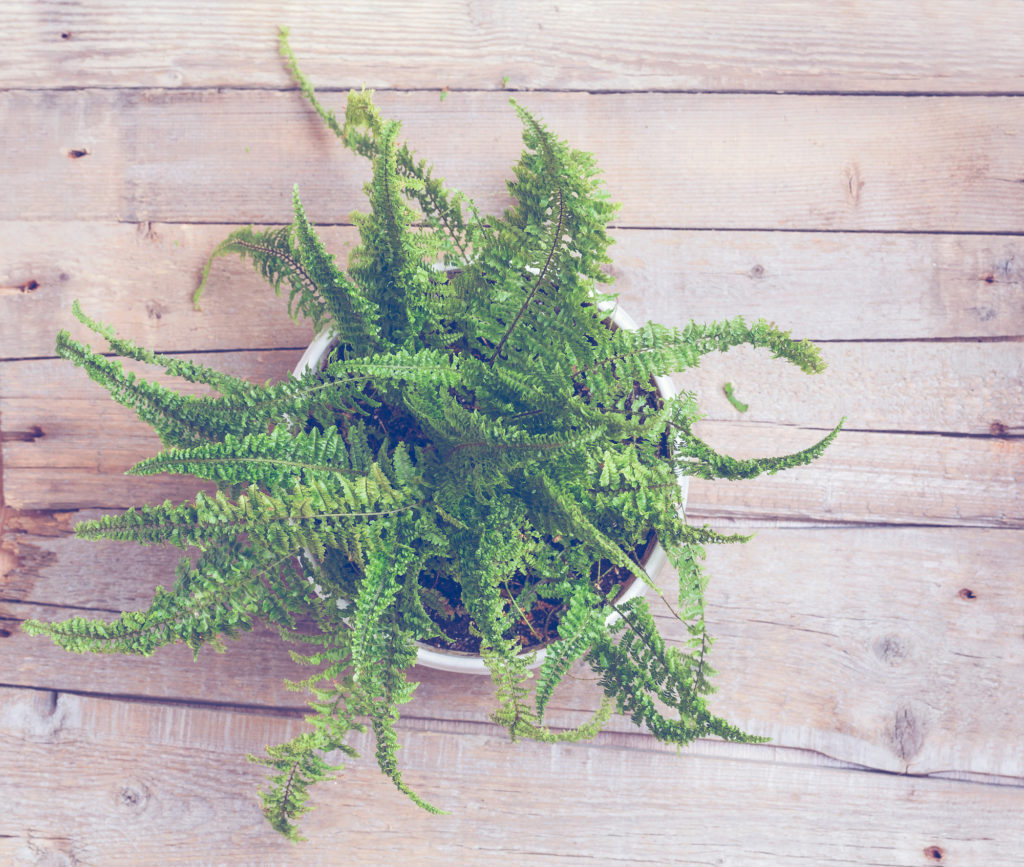 In the studies conducted by Dr. Wolverton, the Boston fern ranked the highest out of all plants tested in its ability to remove formaldehyde from the air.

Boston Fern plants prefer to clean the air from a cool location with high humidity and indirect light. They’re relatively easy to grow, but soil does need to stay moist. Check it daily to see if it requires more water, and give it a good soak once per month.

Pollutants removed: formaldehyde (appears in everything from plastic garbage bags to paper towels, facial tissues, floor coverings, and adhesives—and gas stoves and tobacco smoking also release this chemical) and xylene (used as a solvent in printing, rubber, and leather industries.) 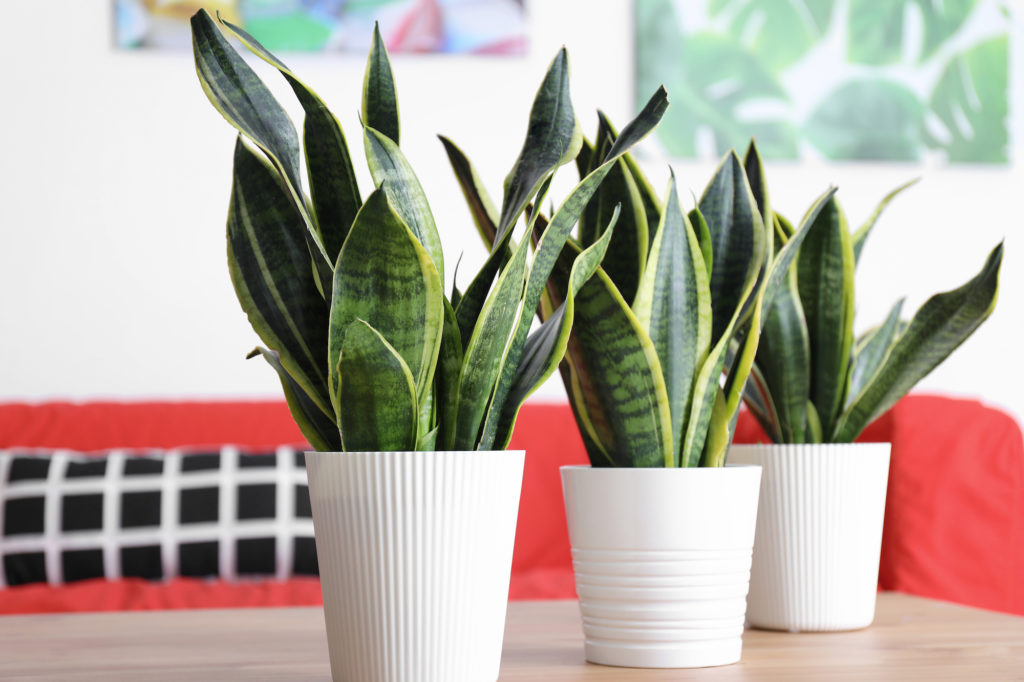 This is one of the hardest houseplants to kill so you’re in luck if you’re a beginner or have a black thumb. The snake plant is a hardy succulent, making it a great houseplant because it can survive in some of the toughest conditions, including a variety of temperatures and light conditions. Just be careful to not overwater. 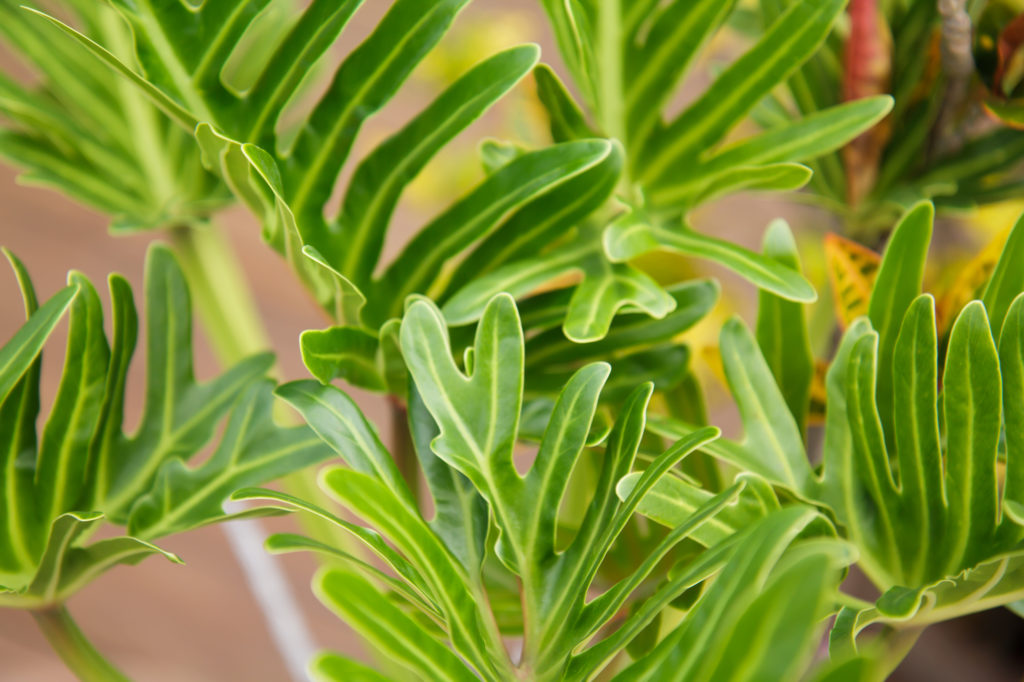 Those ranking high on Dr. Wolverton’s tests include the Red Emerald (Philodendron erubescens), the Lacy Tree (Philodendron selloum), the Heart-Leaf (Philodendron oxycardium), and the Elephant Ear (Philodendron domesticum or tuxla). Philodendren types are easy to grow and thrive with little attention, providing years of detoxifying for your home or office for even the blackest of thumbs.

In general, philodendrons prefer medium intensity light but will tolerate lower light conditions. The Heart-Leaf philodendron is probably popular because of its propensity to thrive anywhere indoors. Direct sun will burn the leaves of most philodendrons and stunt plant growth. 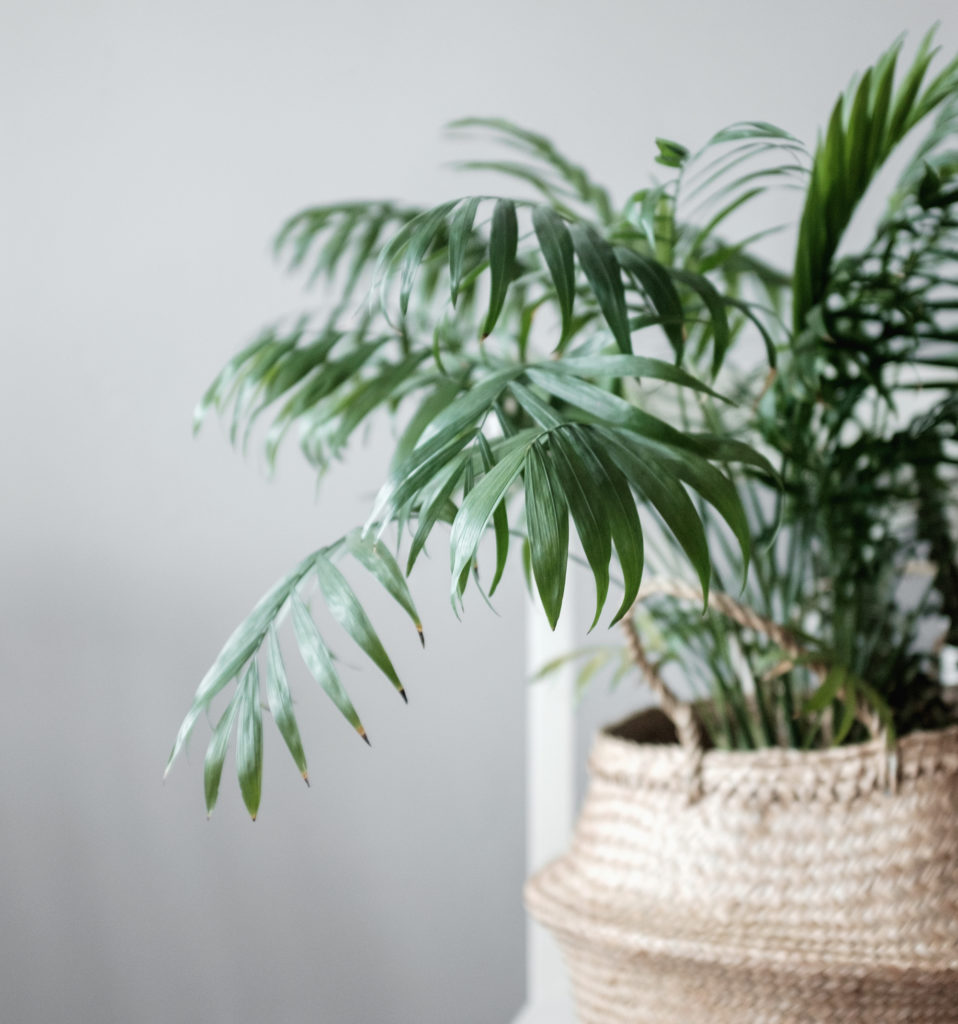 A superstar for filtering formaldehyde, the bamboo palms thrive in full sun or bright light. Its lacy, green fans born on clusters of slender canes add humidity to any room, plus give off a serious tropical vibe.

Part of the reason they can filter so much air is that they can grow to be pretty big—as tall as four to 12 feet high, making them exciting (and pet-friendly) indoor additions. The bamboo palm prefers bright indirect light and a temperature of 60-70 F. 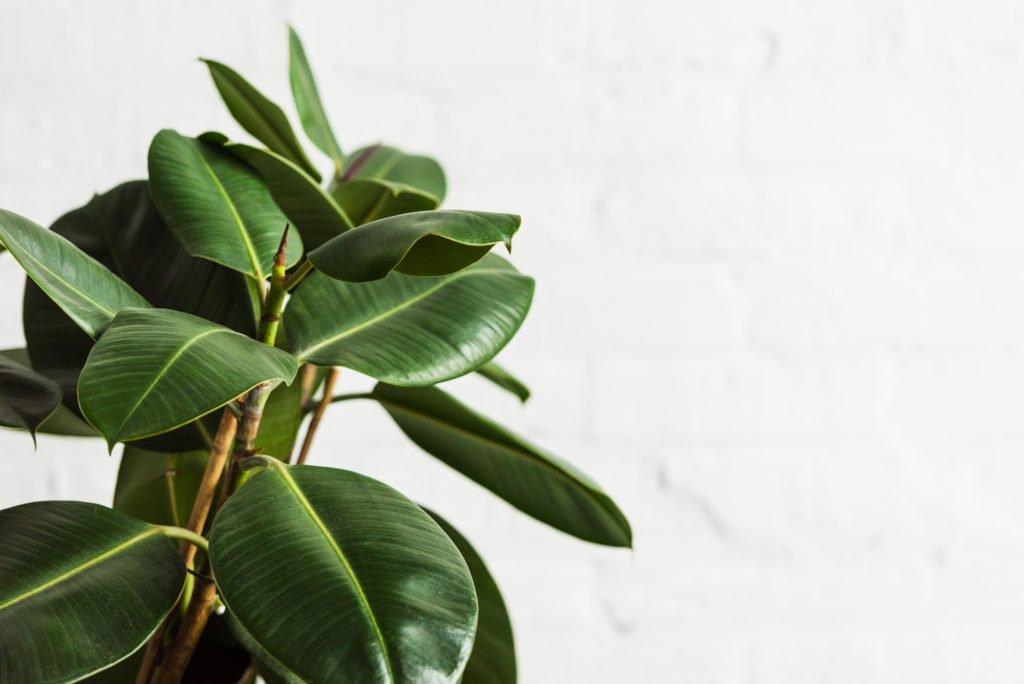 The rubber plant is especially effective at removing formaldehyde from indoor air, and grows very well inside and tolerates temperatures as low as 40 F for brief periods. Its ideal temperature range is 60-80 F.

While rubber plants prefer semi-sunlight to semi-shade, they will tolerate dim lighting, making them extremely easy to situate. You’ll do best to avoid direct sunlight, especially in summer, so pull them away from extreme sunny spots by the window. 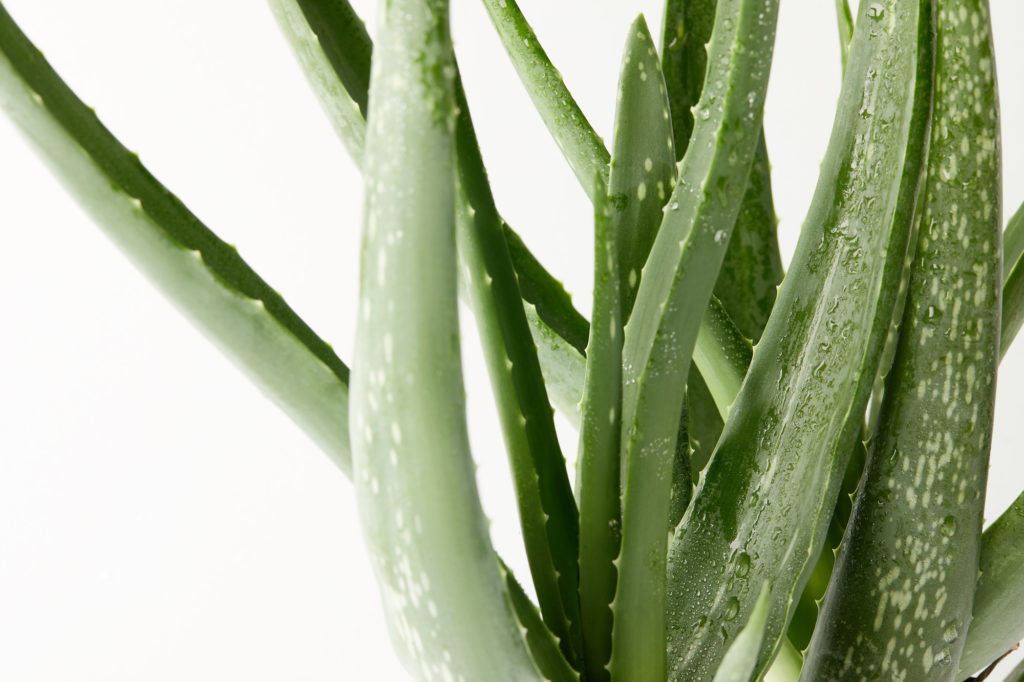 In addition to being easy to care for, aloe vera plants have serious natural health claims. The plant’s leaves contain a clear liquid full of vitamins, enzymes, amino acids, and other compounds that have wound-healing, antibacterial, and anti-inflammatory properties. Aloe vera is great for sunburns and even treating skin conditions like psoriasis.

More Benefits of Having Plants in Your Home

Studies show plants can help relieve stress by calming a person’s sympathetic nervous system, and can also make you feel happier. Who doesn’t want more calm and happiness in their life?

Additional research shows spending time around nature has a positive effect on a person’s mood and energy levels – it’s the green effect.

More information on Dr. Wolverton’s study and specific chemicals can be found on his website.

DIY Perfume: How to Make Roll On Essential Oil Recipes