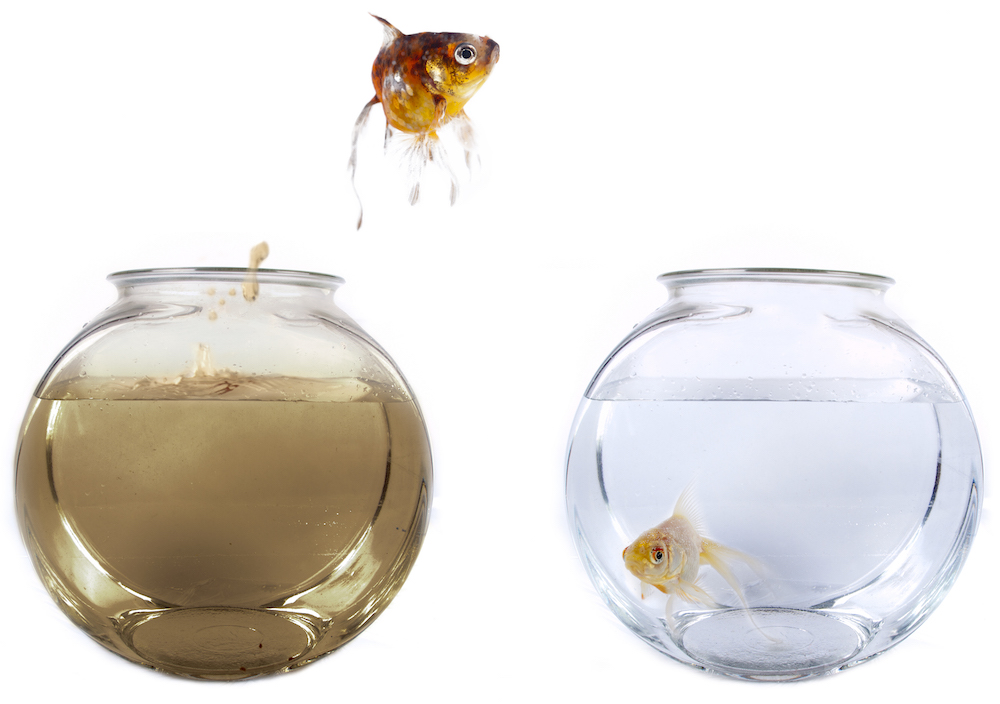 Inside This Post: The stark differences betweenPasteur’s Germ Theory and Bechamp’s Terrain Theory when it comes to germs and viruses. Pasteur’s Germ Theory has remained the foundation of modern Western Medicine today while Bechamp’s theory stresses the importance of maintaining a healthy inner terrain to create an inhospitable environment which illness and disease cannot thrive, a theory the medicalized society doesn’t want people to know.

What is Germ Theory and Terrain Theory?

Have you ever wondered, why is it that some people get sick while others don’t show any symptoms of the same illness, and others hardly ever get ill?

Maybe one of these scenarios has played out in your life: 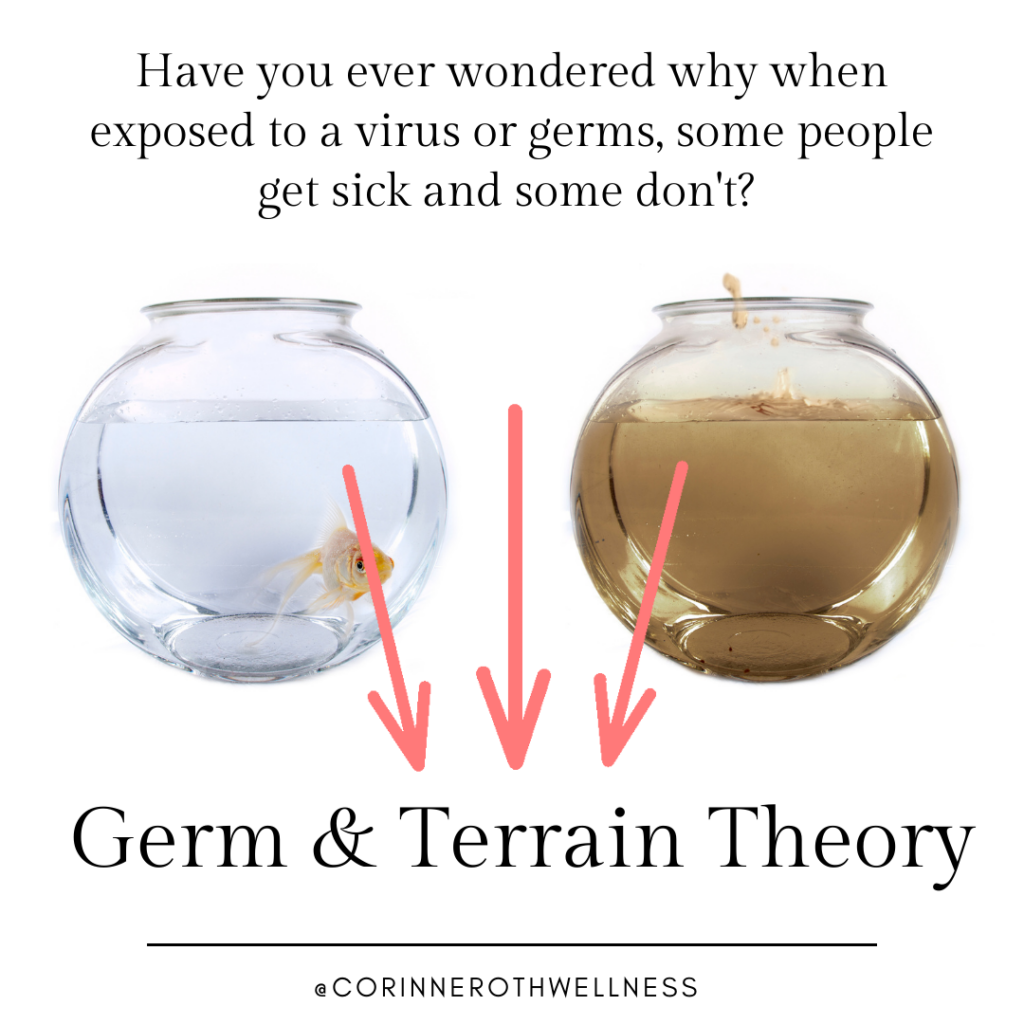 Two nineteenth-century researchers, scientific contemporaries, and fellow members of the French Academy of Science, came up with two starkly different theories on the views of biology and disease pathology.

In 1861, Louis Pasteur (1822–1895) announced he’d discovered Germ Theory – a concept he said proved that germs do in fact, cause disease. Pasteur’s Germ Theory has remained the foundation of modern Western Medicine today.

At the same time, Antoine Bechamp (1816–1908) introduced the concept of Terrain Theory – the notion that germs and viruses can only turn into disease if they are inhibiting an unhealthy organism.

One theory has been touted as a great discovery of science and the other has been shunned as nonsense in allopathic medicine. 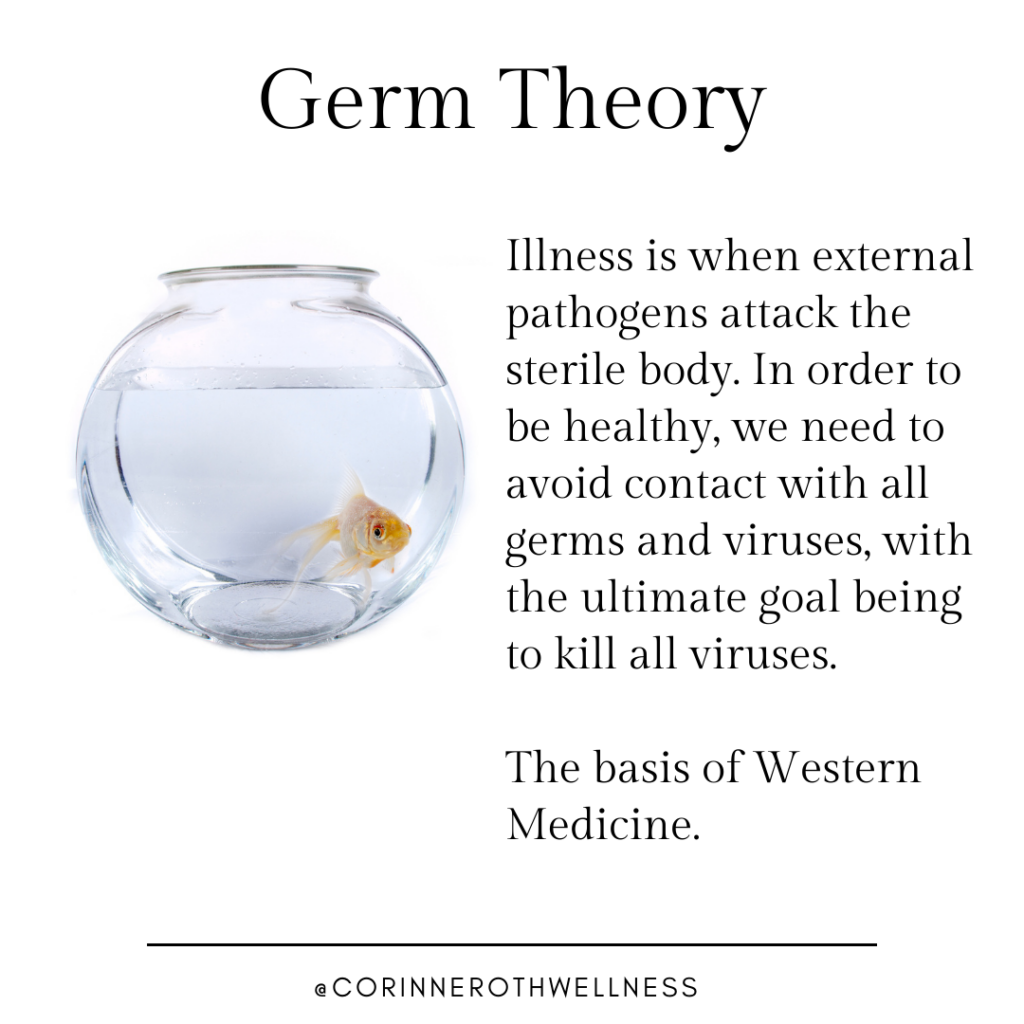 Germ Theory is at the foundation of modern Western Medicine, and is built upon the basis that illness occurs when external pathogens attack a sterile body. To be healthy, Germ Theory says we need to avoid contact with all germs and viruses, ultimately the goal is to kill all viruses.

Germ Theory concludes viruses and germs are at the foundation of an illness, and the theory does not consider the state of the body as part of the problem.

The emphasis of looking at germs and viruses as the problem, has led to the development of antibiotics and vaccines and laid the groundwork for synthetic drugs, chemotherapy, radiation, surgical removal of body parts and has become the medicine of choice.

Precautionary measures like washing your hands, staying away from those who are sick, using hand sanitizers and using effective germ killing measures are at the center of germ theory. 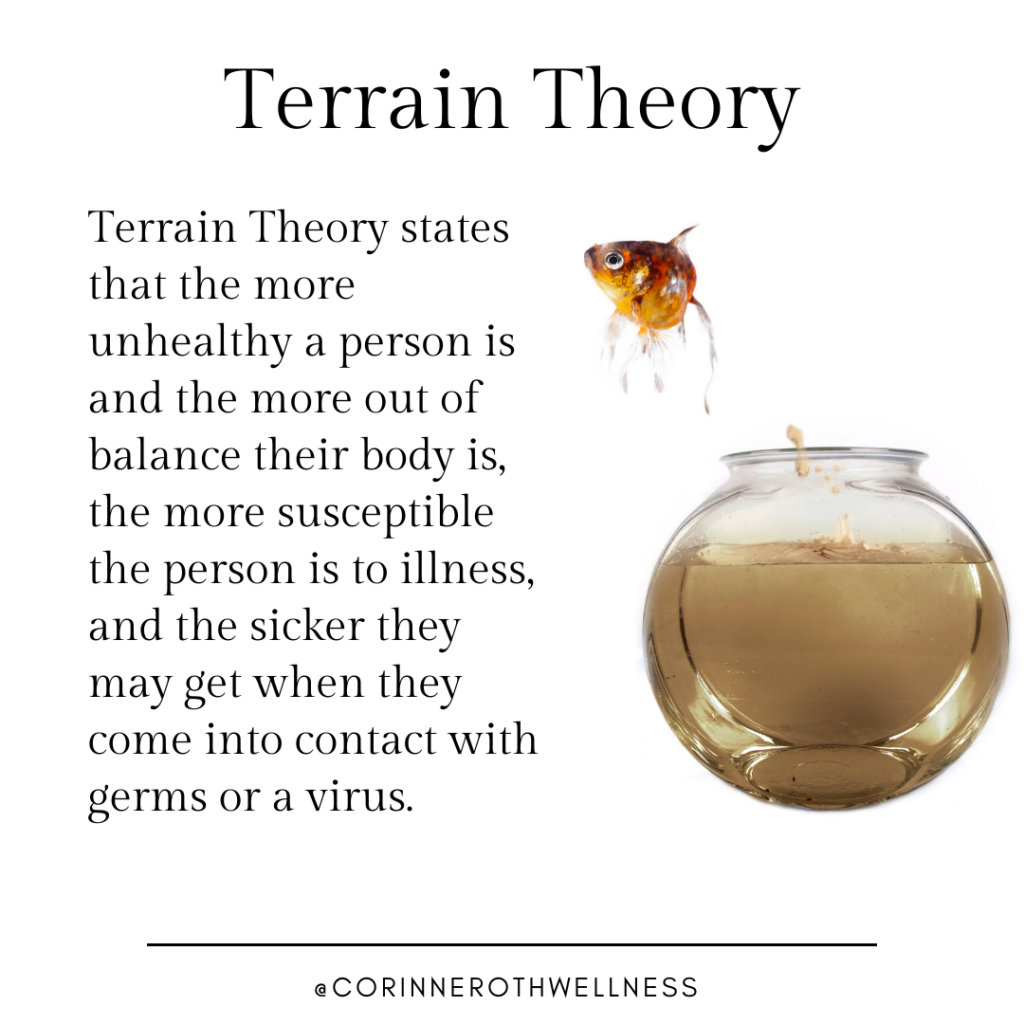 Behcamp’s Terrain Theory considers the health status and internal environment of the individual from which a virus or germs come in contact. Bechamp stresses that the condition of the human body plays a more important role in wellness and disease than the germs that infect it.

Terrain Theory states the unhealthier a person is, and how far away the body is from homeostatis, the more susceptible a person is to illness. This also factors into how sick a person can get when they come in contact with germs or a virus.

Think of the fish bowl picture – the dirtier your tank – the more unhealthy your inner terrain, but one which can be cleaned up.

Bechamp’s theory stresses the importance of maintaining a healthy inner terrain which is found by eating healthy, living a healthy lifestyle, practicing stress management, emotional health, and reduction/elimination of toxins and exposures. All of these healthy lifestyle measures together strengthen the immune system and provide you with a strong defense to illness.

According to Bechamp’s Terrain Theory, germs and viruses thrive in sick environments.

Unhealthy body environments can be negatively affected by many factors:

If your body is working optimally, your environment will become an inhospitable host to foreign invaders. 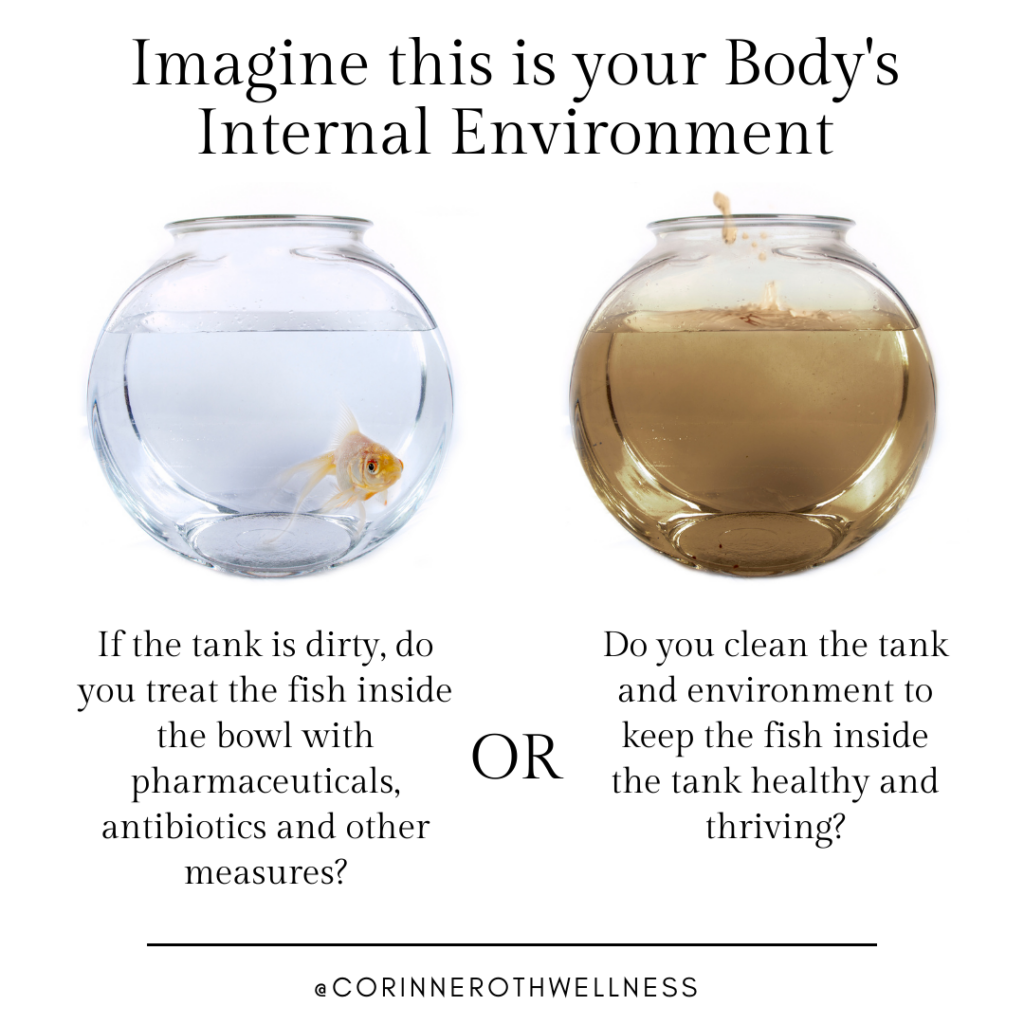 Which One – Germ Theory or Terrain Theory – is Better?

There’s a clear and defined bias in favor of Germ Theory by the Western world and profit-driven pharmaceutical industry, and one which does not serve the public’s health.

A take-no-prisoner assault on germs and viruses by large overuse of antibiotics and anti-fungals has caused “superbugs” most synthetic drugs can’t touch.5 Some have estimated that drug-resistant pathogens will become a bigger killer than cancer by 2050.4

If one can discern themselves against medical propaganda, you can see how the Terrain Theory gives you tangible ways to protect yourself from illness in everyday life.

Sure, we should heed the directives of washing hands and avoiding others who are sick or if you’re feeling unwell, but the foundation of the Terrain Theory is why it’s more necessary now than ever to have proactive steps to improve health, and practice lifestyle wellness for when we do come in contact with germs.

Follow the Terrain Theory and Strengthen Your Immune System

Strengthen your immune system, and when you learn about why gut environment and intestinal microbiome is critically important in providing resilience against external perturbation, then you’ll have an even greater understanding of how integral the state of the body is against illness.

The importance of gut health being touted more recently, it’s important to know that methods employed by The Germ Theory such as vaccines, sanitizer, antibiotics and also toxins (glyphosate specifically) can alter the gastrointestinal microbiome in favor of pathogenic microbes. Diminished microorganism diversity in the gut has been associated with a slew of conditions like “allergy, diabetes, obesity, arthritis, inflammatory bowel diseases and. . .neuropsychiatric disorders.”5

These kill, kill, kill methods prime the body for illness.

Despite what you’ve been told, your health is entirely in your hands.

We must stop living in a medicalized society that devotes its resources to dealing with sick people and illness, and generates more of the same with each new script and sterilizing solution, to one that no longer degrades society’s health for a dollar.

Allow this knowledge to empower you, and ensure your inner terrain is so robust and healthy that the germs and viruses find you inhabitable.

Your health is truly in your own hands. If you do not fight for what you want, you will cry for what you lost.

How to FINALLY Get Rid of Urine Smell in Your Bathroom