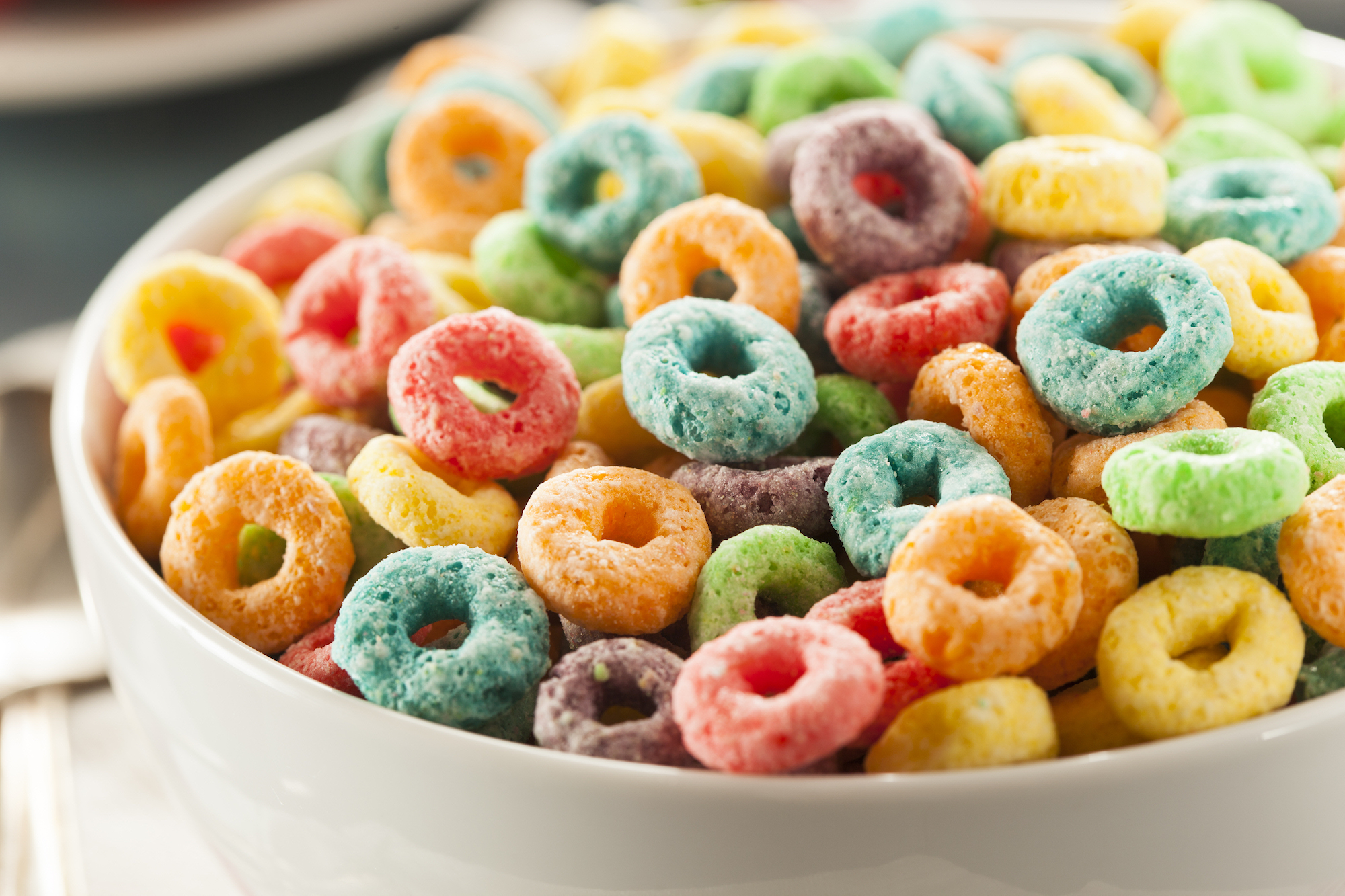 Artificial Food Dye: Is Food Coloring Bad for You?

Inside This Post: Are food dyes harmful to your health and should young children eat processed foods manufactured with artificial colours? Research-backed studies and information on dyes to help you make informed decisions the next time you’re at the grocery story or eating out.

Is There Risk in Rainbow Colored Food and Can Food Dye Bad For You?

You can probably guess which foods have artificial food dyes based on it’s color. Food dye is responsible for the bright color of candy, cereal, sports drinks, baked goods and in many processed foods. They’re even in some medications, salad dressing, smoked salmon, mouthwash and cosmetics.

In fact, artificial food dye consumption has increased by a whopping 500% in the last 50 years, and children are the biggest consumers of them. (Source, Source, Source).

Artificial foods dyes are often added for marketing purposes (there’s no nutritional purpose for them) to make food more appealing with brightly colored appearances, but at what cost does this marketing affect the consumer?

There are many studies showing artificial food dyes cause serious side effects, particularly hyperactivity in children, and have caused cancers in animals, contain cancer-causing contaminants, and are inadequately tested for problems still to this day.

While regulatory agencies, like the USA’s Food and Drug Administration (FDA) and European Food Safety Authority (EFSA) have concluded there isn’t enough evidence food dyes pose a significant risk to the consumer, let’s let the studies in this article and scientifically-backed research help you make your own choices when it comes to the safety of the food you put into your mouth, and particularly feed to your children.

What is Unnatural Food Dye?

Artificial food dyes dyes are chemical substances developed to be added in the food creation process to enhance the appearance of food by giving it artificial color, and as an eye-catching marketing tool.

The first official artificial food colorings were created in 1856 from coal tar, although natural colors had been added long before that. Nowadays, food dyes are typically created from petroleum.

While hundreds of artificial food dyes have been developed in the past two centuries, only a handful of them still exist and are used in food because so many were found to be too toxic for human consumption.

If you look, you’ll find many natural and organic manufacturers opt for natural food colors such as beta carotene and beet extract, but the majority of companies still choose artificial food dyes because they produce a more vibrant, catchy color.

Where is Food Dye Commonly Found?

Food dyes may cause allergic reactions for some people, and hyperactivity in children who react to artificial colors. However, it’s important to note most food dyes are found in unhealthy processed foods that many avoid anyways.

Can artificial food dyes cause cancer? Here’s what studies have shown in animal studies below.

The most popular food dyes are Red 40, Yellow 5 and Yellow 6. These three artificial food dyes make up 90% of all the food dye used in the US . 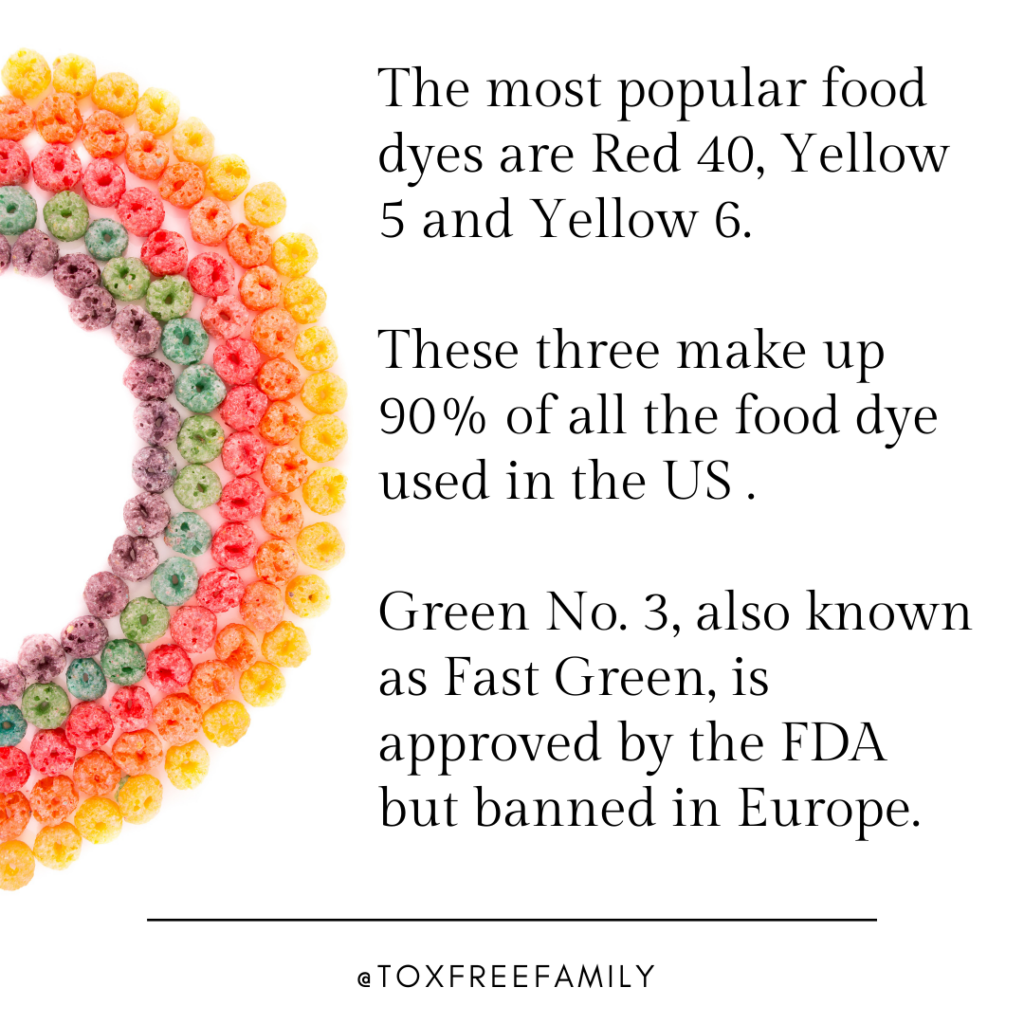 Are artificial colors bad for you?

The three most widely used dyes, Red 40, Yellow 5, and Yellow 6, are full of known carcinogens.

According to the Center of Science in Public Interest (CSPI), back in 1985, the acting commissioner of the FDA said that Red 3, one of the lesser-used dyes, “has clearly been shown to induce cancer” and was “of greatest public health concern.” However, Secretary of Agriculture John R. Block pressed the Department of Health and Human Services not to ban the dye, and he apparently prevailed—notwithstanding the Delaney Amendment that forbids the use of in foods of cancer-causing color additives.

Each year about 200,000 pounds of Red 3 are poured into such foods as Betty Crocker’s Fruit Roll-Ups and ConAgra’s Kid Cuisine frozen meals. Since 1985 more than five million pounds of the dye have been used.

In addition, according to the report, FDA tests show that the three most-widely used dyes, Red 40, Yellow 5, and Yellow 6, are tainted with low levels of cancer-causing compounds, including benzidine and 4-aminobiphenyl in Yellow 5. However, the levels actually could be far higher, because in the 1990s the FDA and Health Canada found a hundred times as much benzidine in a bound form that is released in the colon, but not detected in the routine tests of purity conducted by the FDA. 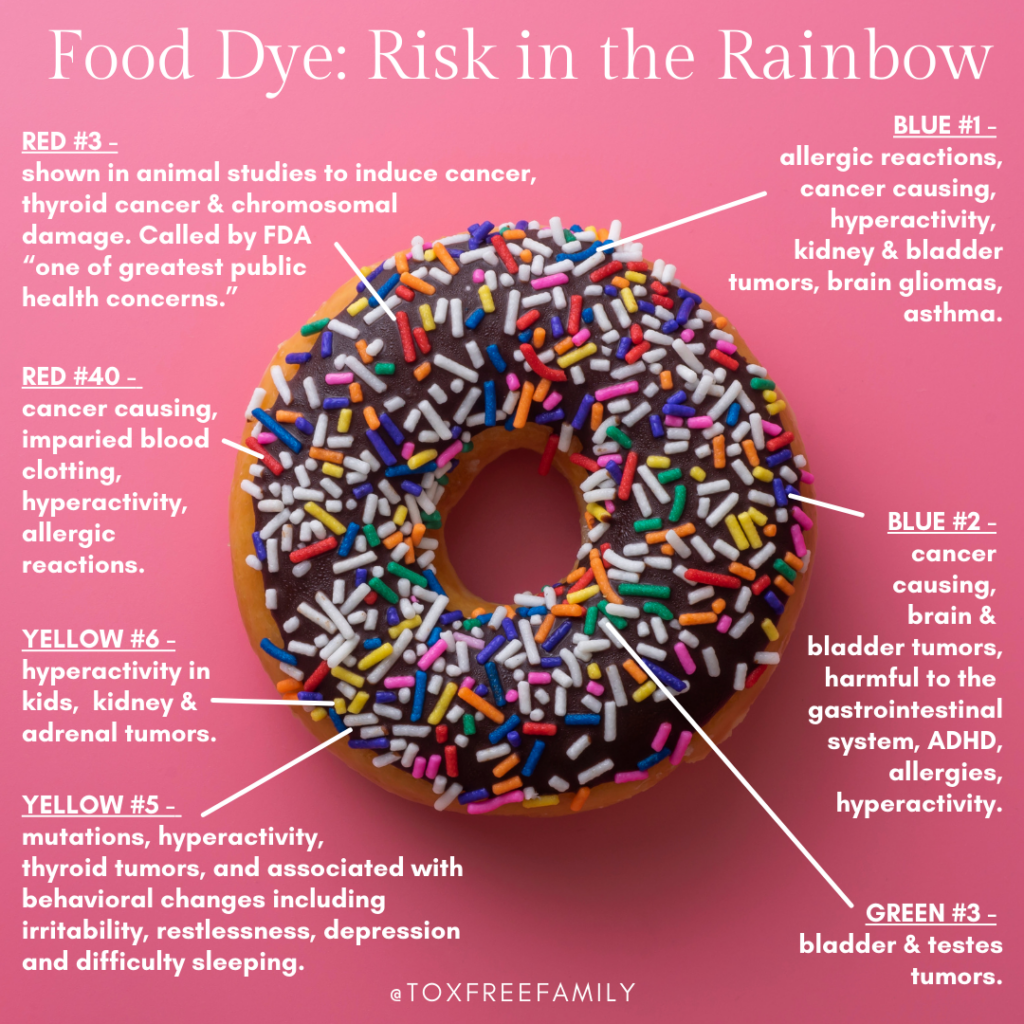 How Does Artificial Food Coloring Affect the Body?

Many parents find a connection between their child’s behavior and consumption of food, candy or drink containing one or a combination of food dyes. Here are several studies that back up this claim. In fact, numerous  studies have demonstrated that artificial food dyes cause hyperactivity in children. 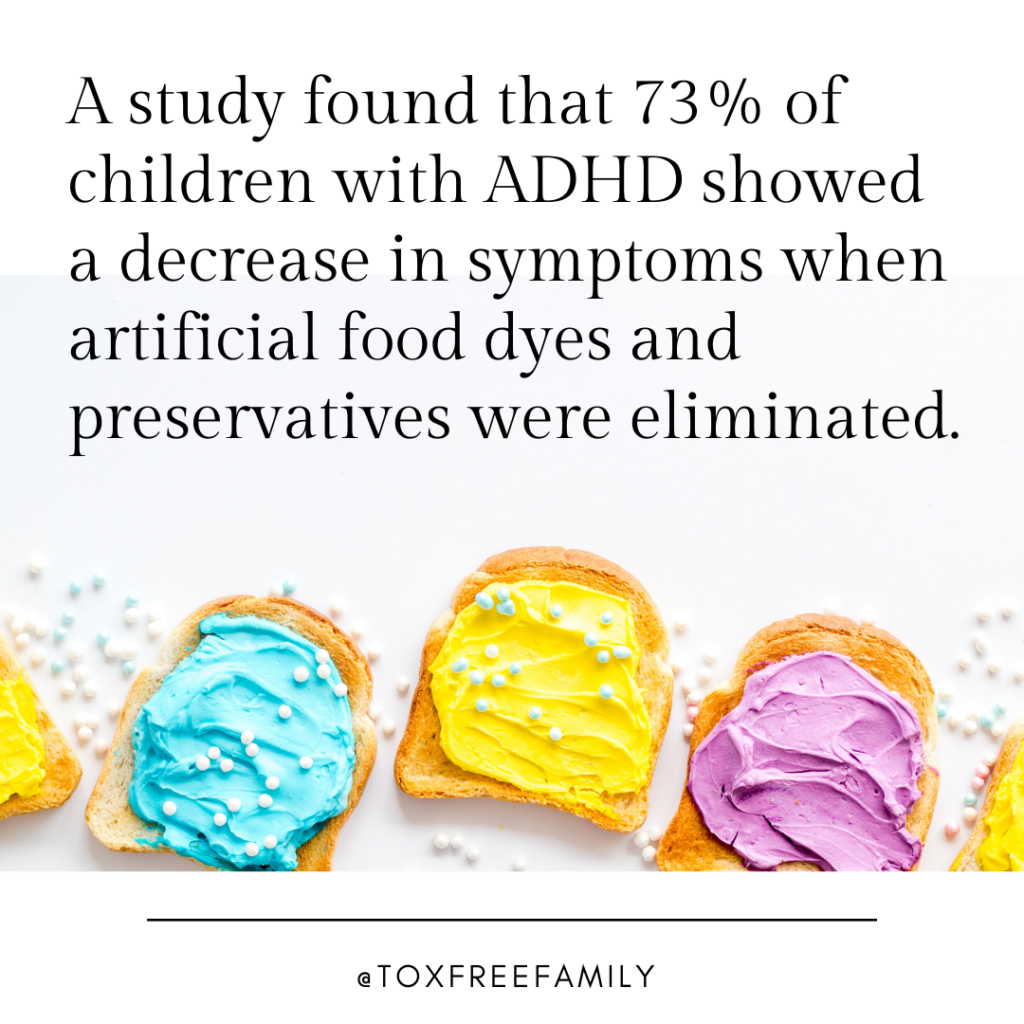 Regulatory agencies, including the FDA and the EFSA, have concluded that the dyes do not pose significant health risks and still allow food dyes to be added and manufactured in foods at restaurants, fast-food and to be purchased at your local grocery store, although animal studies have shown evidence food dye to be carcinogenic and contain cancer-inducing contaminants.

Interesting enough, some food dyes are deemed safe in the US, but are banned in Europe from human consumption, making the logical of safety extremely confusing.

For example, Green No. 3, also known as Fast Green, is approved by the FDA but banned in Europe.

Does Foods Actually Need Food Dyes and at What Risk?

“Dyes add no benefits whatsoever to foods, other than making them more ‘eye-catching’ to increase sales,” said James Huff, the associate director for chemical carcinogenesis at the National Institute of Environmental Health Sciences’ National Toxicology Program.

Presented with the studies showing a correlation in animal studies that the consumption of artificial food colors leads to cancer-caused tumors, as well as reactions in children including ADHD, hyperactivity, trouble sleeping, irritability, restlessness, and depression, it’s up to the consumer to decide what should and shouldn’t be consumed, because regulatory bodies won’t do it for you.

What we can deduce from the CSPI study and other studies, is that the continued use of food dyes in food presents unnecessary risks to humans, especially to children. 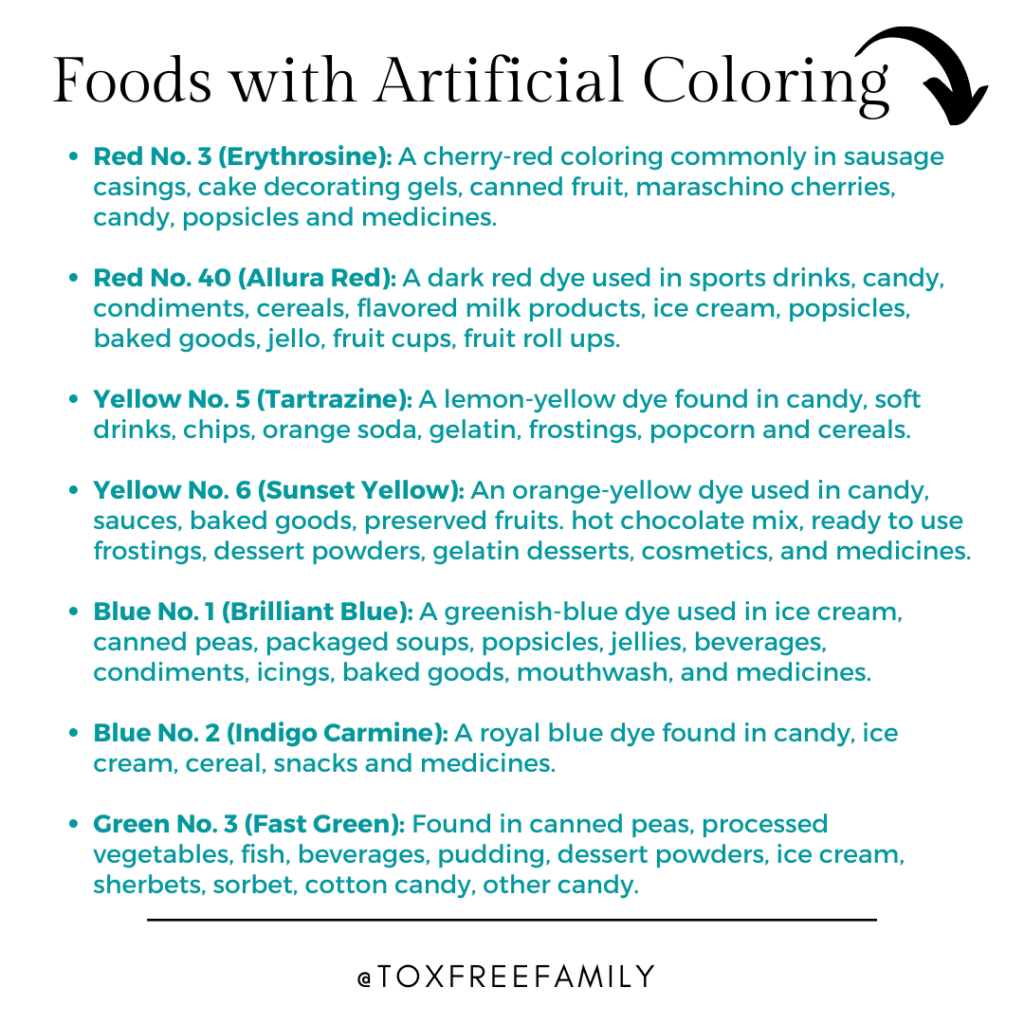 Removing Toxins: What to Tackle First & What Makes the Biggest Impact

6 Dangers of Hand Sanitizers & Safer Options To Reach For Instead