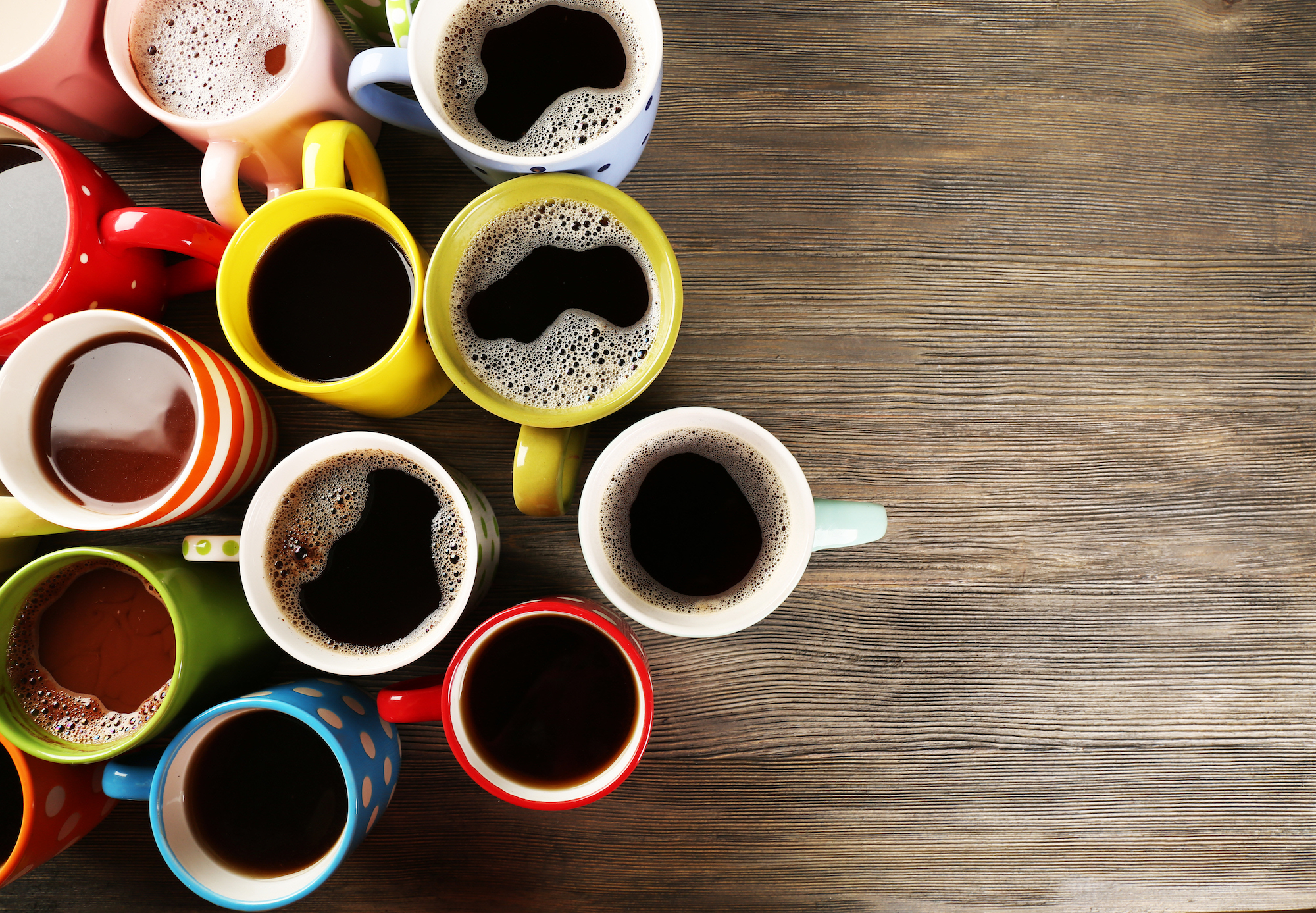 Coffee & Pesticides: What’s In Your Coffee Can Hurt Your Health

What’s Really In My Coffee?

Several years ago when I was searching online for organic coffee, one label kept grabbing my attention.

Of course, now that I know the high rate of pesticide and chemical exposure of coffee crops, I choose organic coffee, but are you also doing the same when it comes to your coffee?

Coffee once made headlines that it was considered bad for us to drink, and now research shows it has quite the opposite, and in-fact, coffee has many antioxidant and health-promoting benefits.

Plus, it’s a natural by-product of having kids.

In our home, my husband and I drink about 5 cups of coffee each morning.

Over the course of a year, that’s 1,825 cups of coffee a year between the two of us.

That’s a heck of a lot of daily exposure my body and insides are getting to toxins and pesticides if we aren’t careful.

When we drink coffee regularly, over time certain chemicals which don’t detox from the body add up, as do the doctor’s bills.

You may stand in line at your favorite coffee shop trying to decide what kind of coffee to satisfy your taste buds, but you may not think about where the coffee is actually coming from or how it was produced.

The reality is, the source and process of how your coffee came to be in your cup, matters.

It matters a lot.

Not all coffee is created equal, but here’s how to get yourself a good, healthy cup of coffee and what to avoid when picking out coffee beans.

Are There Toxins in Coffee?

The simple answer is yes.

But this isn’t a shut and closed answer.

Coffee, is the second most commonly traded commodity in the world, after petroleum.

Coffee, being a much sought after consumable product, not only treats it’s crops with chemicals, but does everything it can to cut costs including inferior drying, re-wetting, large batch roasting, and bad storage practices in the post-production handling of coffee.

Coffee once harvested, is processed using different methods that may contain high levels of harmful toxins, pesticides, and mycotoxins (mold) and usually results in contamination with ochratoxin-A in the final product.

Coffee is one of the most chemically treated crops, with some estimates stating every acre of coffee gets treated with 250 pounds of agricultural chemicals.

After you go wipe off your shirt from the coffee you just spit out, here’s a slightly reassuring stat to ease your panic.

Some published studies show that roasting coffee seems to decrease toxins by about 85 percent, but many others believe that the chemicals aren’t “cooked off” while roasting coffee beans, but rather “cooked into” the beans.

Even if the studies are accurate, that’s still 15 percent of detrimental toxins that remain are still high enough to encourage buying organic coffee beans to avoid chemical exposure. 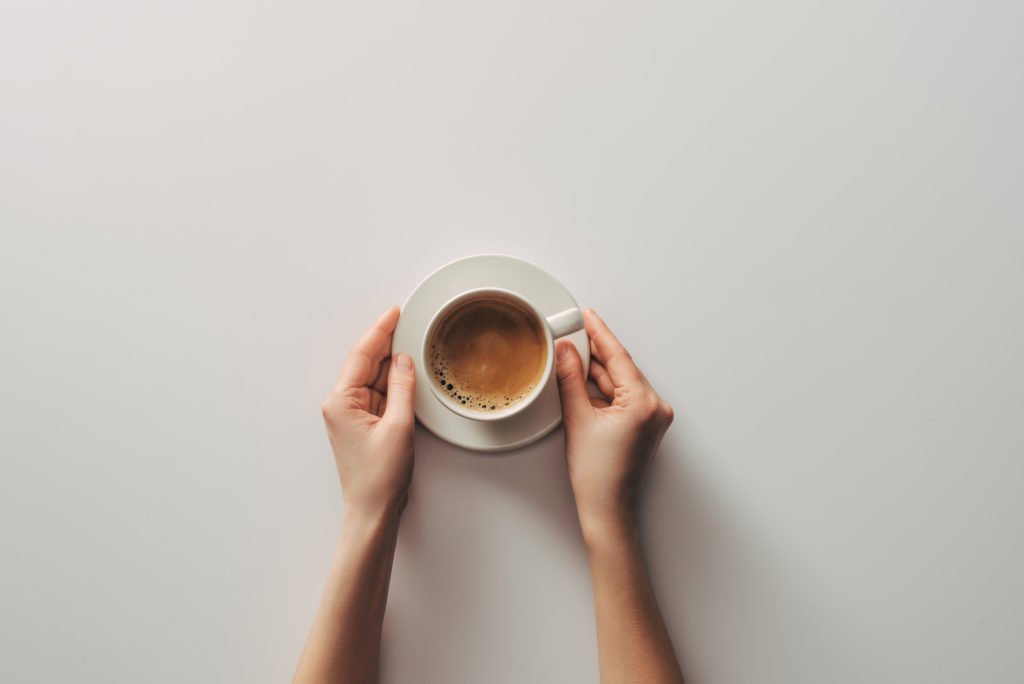 Is Decaf Coffee Safer For You?

You might want to hear this news about your decaf, but you need to.

Conventional decaffeinated coffee is processed using a number of chemicals, some of which have been shown to be carcinogenic.

Unfortunately, decaf coffee has been found to contain higher levels of toxins, including aflatoxin and ochratoxin, than caffeinated versions.

These toxins – aflatoxin and ochratoxin- can cause cell mutation and organ toxicity in humans.

This occurs because caffeine actually prevents the growth of molds which produce mycotoxins, and decaf because it doesn’t have any caffeine, lacks the same protective mechanism.

“Caffeine is a natural anti-insect and antifungal defense mechanism for the plant. It deters mold and other organisms from growing on the beans. Mold is everywhere, but caffeine helps prevent it from growing on the beans while they’re in storage. When you remove the caffeine, your beans are defenseless. Decaf coffee is higher in both aflatoxin and ochratoxin. This is one of the reasons decaf tastes like camel sweat.”

Another problem with decaf coffee are the chemicals used in the decaffeination process.

There are reports of people, who while drinking decaf coffee, experienced severe reactions. Originally it was believe there must have been traces of caffeine in the coffee causing the reactions, but it was discovered the cause was from chemicals used in the process of decaffeination and passed along into the coffee.

If you choose to drink decaffeinated coffee, water-processed decaf is a better option.

Here’s What Could Be In Your Coffee

If you aren’t drinking organic coffee, here’s what you could be consuming with your morning cup of joe.

Coffee beans are among the most highly sprayed and chemically treated crops in the world.

Crops are steeped in synthetic fertilizers, pesticides, herbicides, fungicides, and insecticides. Not only are these chemicals extremely harmful for the farmers exposed to a high level of chemicals, as are the surrounding communities, but these chemical presences are highly toxic and detrimental to human health.

When you buy certified organic coffee, you know there are no synthetic fertilizers or chemicals used in growing or production, which means cleaner beans, air, land, and water. Organic coffee is also grown with organic fertilizers.

As of now, the US government does not have maximum residue limits (MRLs) for pesticides used on coffee beans. This leaves you  open to a wide range of unknown pesticide residue levels lurking on the surface of your coffee.

Coffee-growing countries each have their own monitoring systems and limits for pesticide use. The grower’s regulations may be very different from the residue limits that the importing countries set. Usually local regulators set maximum tolerances for residues and monitor them upon import. However—whether or not individual coffee farmers abide by local law, many coffee-growing countries still use pesticides banned in the US and Europe.

Here is a long list of all the pesticides used on coffee crops.

I stick to organic coffee beans to avoid exposure to pesticides. 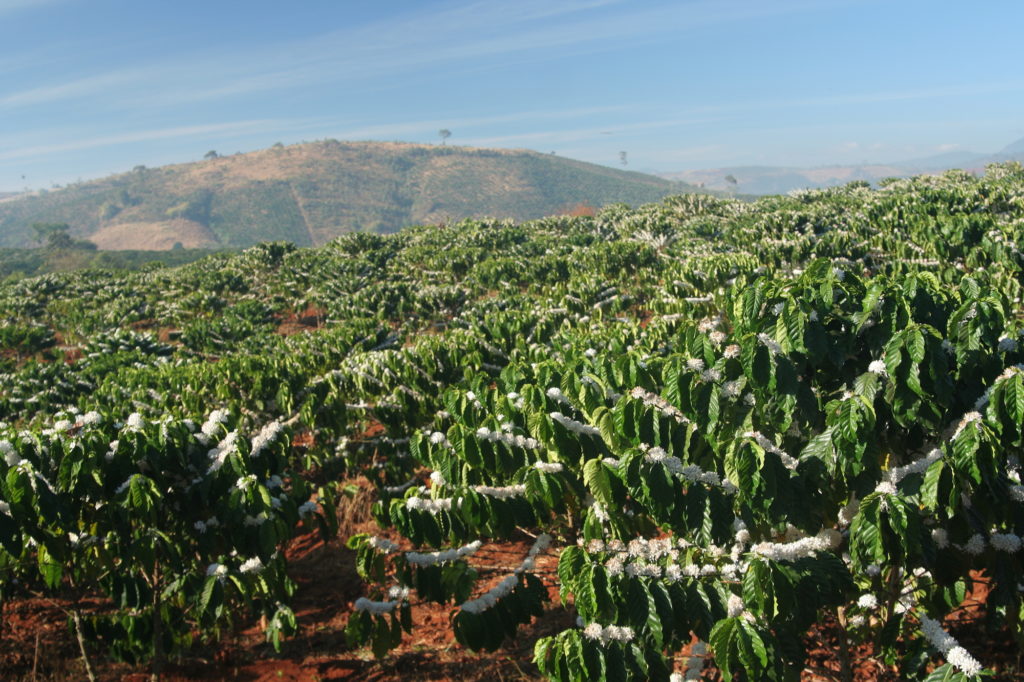 The Side Effects From Coffee Aren’t From Caffeine, It’s Actually a Chemical Reaction

Many people think caffeine from coffee can lead to things like jitteriness, bitter flavor and racing heartbeat.

The truth is that many of these negative side-effects which are generally attributed to caffeine, are actually the result of the ochratoxins in the coffee.

The presence of ochratoxins in coffee are significantly impacted by the processing procedures. While molds can be killed off during the roasting process, ochratoxins often survive.

Remember toxins such as aflatoxin and ochratoxin, can cause cell mutation and organ toxicity to humans.

Mold In Your Coffee

Mycotoxins are molds that can grow on coffee beans, particularly when they are improperly processed.

One such toxin, ochratoxin, has been shown to cause cell mutation and even death of neuron cells in humans. This is a good reason to avoid dry-processed coffee because mechanical and wet-processed coffees have fewer mycotoxins.

Dave Asprey has brought mainstream attention to the problem of mycotoxins (mold toxins) in coffee. As he explains:

“Mycotoxins are damaging compounds created by molds which grow on coffee beans (among other things). These compounds cause all sorts of health problems like cardiomyopathy, cancer, hypertension, kidney disease, and even brain damage. They also make your coffee taste bitter, like it needs sugar.”

He goes on to explain that not all coffee has this problems but that the source of your coffee is important:

“Blends” of coffee are bad news because they mix cheap beans from multiple areas, almost guaranteeing that you’ll get some moldy ones. This is why its important to buy your coffee from a single estate, as outlined in the process for finding the highest performance coffee in your city. If you drink mass market coffee, the beans in your grinder may come from several countries. It’s the same logic that tells you not to eat a hamburger made from the meat of 10,000 animals.

While it’s convenient to pop a coffee pod in an instant coffee machine and count to 60 for a steaming hot cup of coffee, it’s not the safest choice.

I don’t have any plastic in our kitchen and try to live as plastic-free as we can, and this also includes our appliances. While it’s taken some time and serious budgeting, I’ve replaced all of our kitchen appliances that had plastics, chemical coatings or other harmful surfaces with stainless steel and safe alternatives – including the coffee pot!

Here’s the problem with coffee pods.

Coffee pods are plastic and when scalding hot water is dripped through the coffee pod, the chemicals in the plastic leech into your coffee (and mix with all the chemicals on your actual coffee.) Single use plastic is not only harmful for the environment, but leeches chemicals like BPA into your food and drink.

Inside coffee makers, the plastic filter holder comes in contact with hot water and thus, leeches chemicals into the coffee here as well.

There are many health benefits of drinking coffee. Modern research has found coffee consumption can decrease the risk of heart disease, stroke and cancer (in moderate coffee drinkers.)

Studies have shown that coffee may have health benefits, including protecting against Parkinson’s disease, type 2 diabetes and liver disease, including liver cancer. It also appears to improve cognitive function and decrease the risk of depression.

Coffee is a natural antioxidant and studies show that Americans get more antioxidants from coffee than from fruits and vegetables, and especially Vitamin C Rich foods. While it’s good that coffee is an antioxidant, it’s not meant to replace antioxidant-rich foods from natural sources. 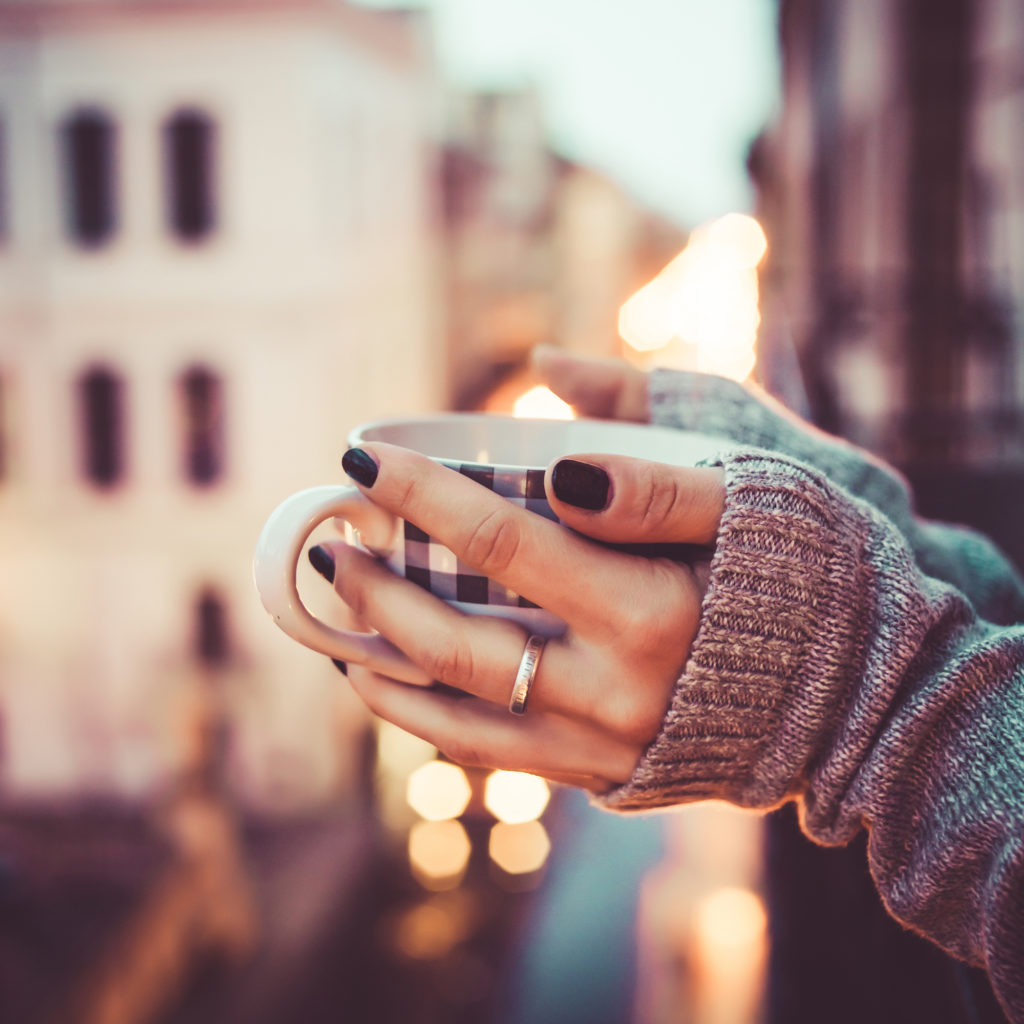 How to Make a Healthier Cup of Coffee

So, what is a girl to do when it comes to drinking coffee that’s not loaded with pesticides, herbicides, fertilizers and mold?

Your best bet is to find the highest quality of organic coffee, that’s been wet-processed.

Chose organic dark roast coffee beans that have caffeine intact. It’s best to grind your own beans (we use this stainless steel grinder) and then brewed using filtered water in a french press. This is your least toxic and best tasting cup of coffee.

I store our coffee beans (pre-ground) in an airtight container in a dark cupboard. It’s because coffee can become damaged and rancid if stored in a place where it’s exposed to light and oxygen.

As a bonus, organic coffee beans are richer in healthful antioxidants, and many people can even taste the difference. Your health, and the health of the planet, both get a boost.

Here are brands of organic coffee safe to drink:

When I drink coffee, I like to add flavors and nutrients such as these:

To gain a full understanding of what harsh toxins are lurking in your home and what happens when you breathe, eat, touch or smell them,  Download Your Free Starter Guide to Environmental Toxins Hiding in Your Home

How to Remove Chlorine & Chemicals from Bath Water